Son of Nicolau Velho and D. Maria Monteiro, D. Nicolau Monteiro was born in the parish of São Nicolau, Porto, on December 6, 1581, where he studied Classics and continued his studies at the University of Coimbra where he obtained his doctorate in Canon-law with distinction. In this city he held the functions of canon and vicar general.

Later, at the city of Porto, he held the position of prior of the Collegiate of São Martinho de Cedofeita, a position that belonged to his uncle João Álvares Moutinho.

In 1645, after returning from a trip to Rome ordered by King John IV to require Pope Innocent X justice for the appointment of bishops to the Portuguese dioceses, D. Nicolau won the esteem of the monarch due to the success of this mission. In fact, he was invited by the king to be master of Prince D. Teodósio, Duke of Bragança, and of his brothers, D. Afonso and D. Pedro.

During his stay in Rome, D. Nicolau spoke several times with the Pontiff in favor of Portugal against Castella, demonstrating to him the injustice that assisted his homeland and in particular in the book, which he wrote under the title Vox Futuris. The ambassador of Castella, conscious of the preference which the Pontiff gave to D. Nicolau, ordered an assassin to shoot him. However it was his coachman to be targeted. This story is described in an article of the magazine "O Tripeiro" dedicated to D. Nicolau Monteiro.

D. Nicolau had been appointed bishop of the dioceses of Portalegre in 1646 and of Guarda in 1655, though, in none of them, it was confirmed. In 1670, Clement X confirmed the appointment that D. Pedro, prince regent, made for D. Nicolau Monteiro to be bishop of Porto. He was the 50th prelate of this city. In the Cathedral, more specifically at the doors of the Episcopal Palace where, on a daily basis, poor people approached, the bishop appointed an alms-giver. He selected another one to help poor and embarrassed families.

On July 2, 1664, he was elected Provedor of the Misericórdia do Porto. In the Book of Honor for the Memory of the Benefactors it is written that, in 1667, he donated a sum so that there would be, incessantly, 6 beds for convalescent men at the General Hospital, and one more at his death. He also offered another sum to establish an additional 6 beds for convalescent women. This donation was accepted on August 13, 1667.

D. Nicolau was a great promoter of the rebuilding of the churches of São Pedro de Miragaia and of São Nicolau. In this church, where he was baptized, the triumphal arch displays his coat of arms.

He died on December 20, 1678. In the city of Porto there is a street named after him, in the parish of Cedofeita, near the Boavista area, which connects the streets of Oliveira Monteiro and 9 de Julho.

The oil on canvas portrait of D. Nicolau Monteiro that is exhibited in the room dedicated to the administration of the Santa Casa da Misericórdia do Porto, was painted by Domingos Teixeira Barreto in 1769. This late Baroque portrait reveals itself to be one of the best made by this painter. Admitted as Brother of the Misericórdia in 1767, Teixeira Barreto was, perhaps, the artist who most works of painting and gilding executed for the institution in the second half of the eighteenth century. 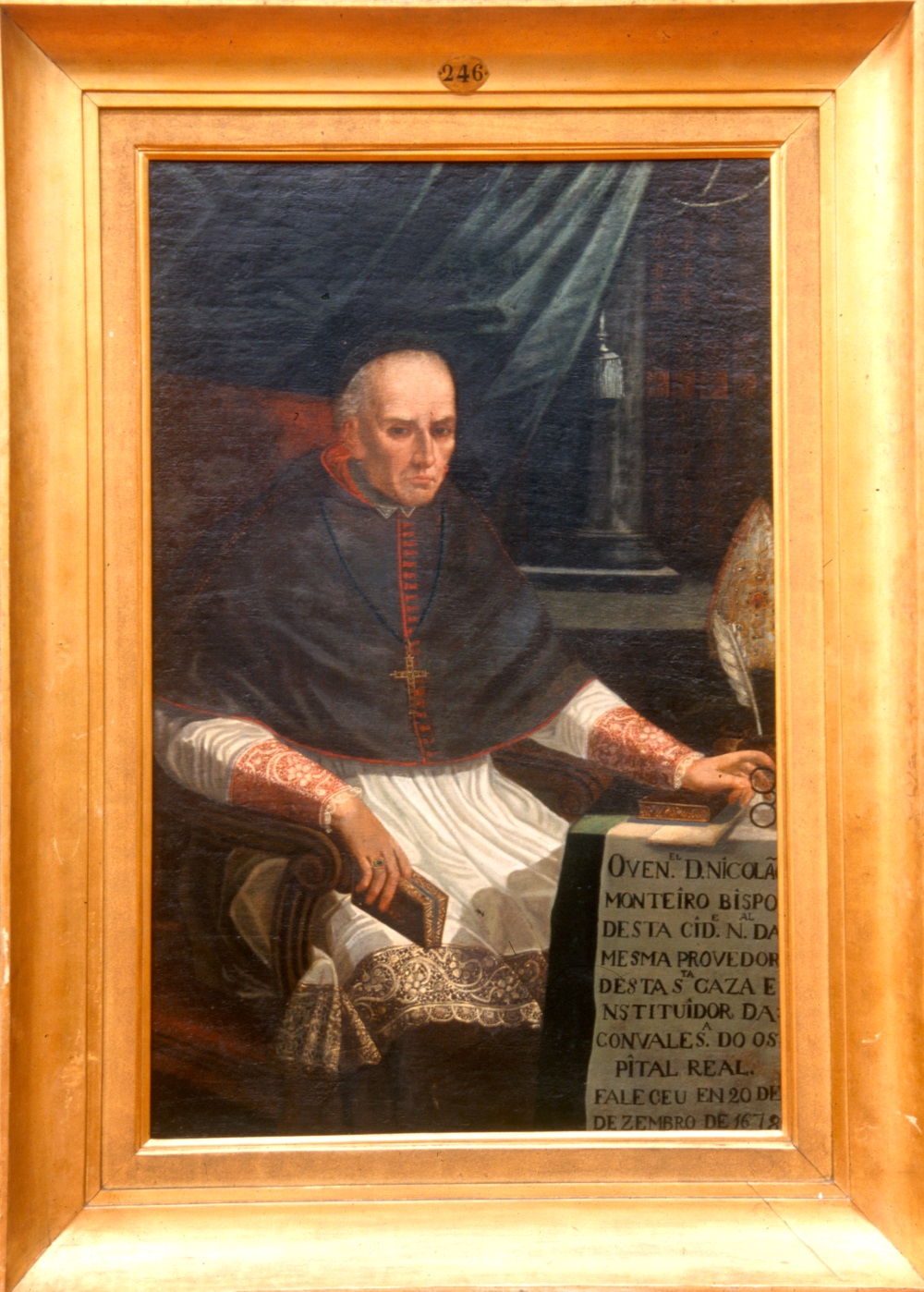