Important Benefactor of Misericórdia do Porto

Son of António Lacerda de Mesquita and Antónia Margarida, this great benefactor of the Santa Casa da Misericórdia do Porto, capitalist and owner, brother and board member of the institution. He was born March 30th 1859 in Vilar, located at the Barrô parish in Resende municipality. Grandson of Luis Cardoso and Ana Margarida (from Vilar) and José de Mesquita and D. Casimira de Lacerda (from Lamas), he was baptized on the 3rd of June of the same year at the Romanesque church of Barrô. His godparents were his uncles Francisco Antonio and his wife, Filipa. At the time they were absent in Pernambuco, Brazil.

Francisco de Lacerda Cardoso immigrated to Brazil, and it is thought that he went when he just over 14 years, which was common at the time because, in 1873, he requested a passport to Rio de Janeiro. According to information contained in his testament, he was in the city of Belém, Pará State capital, where he developed a business activity. He bequeathed to the Sociedade Portuguesa Beneficente do Pará (still active) the usufruct of a building he owned at the Rua de Santo António.

In 1920, Francisco de Lacerda Cardoso was already residing in the city of Porto. At the time of his testament, September 16th 1935, he lived on the street of Costa Cabral, No. 606. He appointed the Misericórdia do Porto as his executor and inheritor: "Of all the remnant of my heritage, including property or root of assets whose usufruct is bequeathed to others, I stipulate as my universal inheritor the Santa Casa da Misericórdia do Porto".

In his will he also included his family and close friends, especially with annuities and the usufruct of several buildings, as well for the poorest and various institutions of the Douro region. As an example it should be mentioned that he bequeathed to Asilo de Mendicidade de Lamego, to Asilo da Infância Desvalida or Raparigas Abandonadas de Nossa Senhora dos Remédios, in the same city, and to the Hospital da Misericórdia de Mesão Frio, the amount of 30 contos (Portuguese currency) each.

In 1927 he received the degree of honorary Brother by "... have anticipated the payment of the legacy of 250 contos (Portuguese currency at the time) to this Misericórdia [Porto] by the benefactor. Joaquim Cardoso Teixeira ... favoring the institution in more than 40 contos ... ".

He died on July 2nd 1936, and was buried in a private section of the Misericórdia do Porto, located at the Prado do Repouso Cemetery, where the Administrative Board ordered the construction of a tomb.

His portrait, exhibited at the space dedicated to the Benefactors, is an oil painting of the renowned painter Acácio Lino, a painter that is represented in this museum and in the main Portuguese museums, namely: Museu Nacional de Soares dos Reis, in Porto; Museu Nacional de Arte Contemporânea, in Lisbon; Museu de Grão Vasco, in Viseu.

The benefactor is sitting with a distinct and elegant posture, in an environment that refers to his everyday life. This is a composition which denotes great sobriety, with the use of discrete tones. His face and hands are the elements on which the light focuses. The rigidity of Francisco de Lacerda Cardoso's face is apparent, because, on his lips, we can guess a tender smile. Moreover, in this painting, Acácio Lino showed two unusual personality traits that characterized this great benefactor of the Misericórdia do Porto: righteousness and generosity. 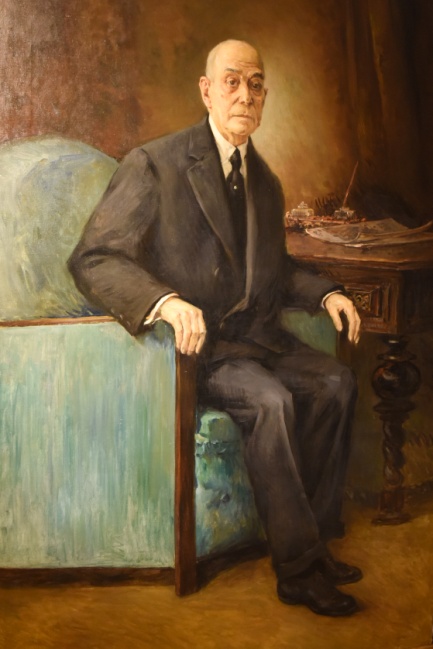