A native of the São Pedro de Miragaia parish, António Monteiro dos Santos was the son of Manuel António dos Santos and Maria Ermelinda Monteiro dos Santos, both born in Azurara parish, at Vila do Conde municipality. He married D. Maria das Dores Silva Santos on 18 July 1917. They had no descendants. He lived at the Rua dos Bragas, located in Cedofeita parish. He was the brother of Manuel António Monteiro dos Santos, another great benefactor of the Misericórdia do Porto, which established the Asilo-Escola para Cegos de São Manuel (Asylum-School for the Blind). In his will it is written that are left "...two hundred and forty thousand escudos (Portuguese currency at the time) to be distributed by all charity establishments and institutions of the city [Porto], such as hospitals, nursing homes, gatherings, institutes, kindergartens, maternities, asylums, etc... which are not administered by the State, public assistance, or town halls...". His legacy also included other institutions outside the city.

With regard to the Santa Casa da Misericórdia do Porto, the benefactor bequeathed 30,000 escudos on credit papers so that the São Manuel Asylum and the School or Institute for the Blind could constitute a single establishment with the designation of "Asilo-Escola para Cegos de S. Manuel, founded by Manuel António Monteiro dos Santos" in a reference to the founder and his brother. He also left the Santa Casa between 1500-6000 escudos for each of the charity and charitable institutions; 36,000 escudos to the domiciliary aid section; 30,000 escudos for the Santo António General Hospital; 30,000 escudos to the foundation of an "economic soup"; 30,000 escudos for the foundation of a lactation center; 300,000 escudos for the construction of ten "Neighbourhoods of the Poor" - Monteiro dos Santos neighbourhood; 800,000 escudos on credit papers for the construction of an Asylum-Hospital for the Incurable and Invalids. In the testamentary list of António Monteiro dos Santos it is important to mention the special determination: "I leave to the animal protection societies of this city [Porto] and the city of Lisbon, one thousand and five hundred [escudos], to continue their humanitarian purposes and to do advertising in favour of the prohibition of bullfighting in this country."

António Monteiro dos Santos died on May 28th, 1924, and was buried at the Private Cemetery of the Venerável Ordem Terceira de São Francisco, at Agramonte. The portrait of Antonio Monteiro dos Santos, exhibited at the MMIPO in the room dedicated to the history and action of the Misericórdia do Porto, was painted by Eduardo Moura in 1926. 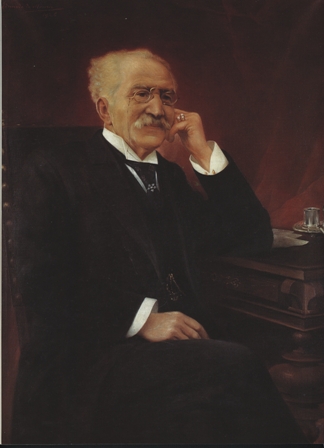